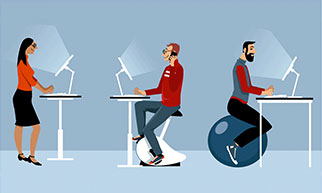 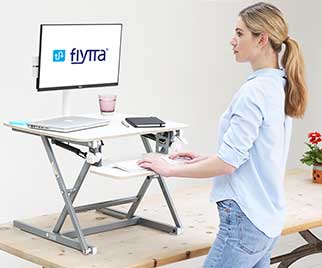 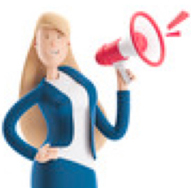 When a US health company tried out standing desks in its call centre, it came up with some fascinating results, which have implications for all sedentary workers and their employers. Similar studies in the UK using Sit-Stand.Com® adjustable desks are producing equally interesting outcomes – an increase in productivity and reduced sitting time.

Call centre workers spend all day at a desk, on the phone. As a result, they suffer among the highest levels of sedentary working of any profession. With around three quarters of a million call centre employees in the UK and almost three million in the US - as well as all those based in call centres globally – they form a vast sector and massive opportunity for physical and mental health improvements.

What do you mean by sedentary lifestyle?

As workplaces, call centres have among the highest incidences of sedentary behaviour. Staff are employed to make and answer repeated telephone calls, with productivity - ie number of calls made - among key out-puts. Being on the phone in front of a computer screen inevitably means employees are desk-bound.

Call centres are frequently cited as amongst the worst places for prolonged sedentary working. An Australian study of workplace activity habits found that call centre workers were the most sedentary and least physically active during work hours, spending prolonged bouts of time seated.

In addition to working, sitting in a car or on public transport, playing screen-based games, watching TV and lying in bed to read are among other sedentary behaviours. Many deskbased workers spend 10 or more waking hours engaged in non-active pastimes. Medical experts recommend you spend no more than 20-30 minutes at a time in a static position, seated or standing. Switching between the two throughout the day is advised for desk-based workers.

Health risks of an inactive lifestyle

The World Health Organization is among bodies highlighting the health risks of prolonged sedentary habits, and has identified physical inactivity as a global public health priority.

Researchers agree that: “A sedentary lifestyle increases all-cause mortality and the risks for cardiovascular diseases (CVD), diabetes mellitus (DM), hypertension (HTN), and cancers (breast, colon, colorectal, endometrial, and epithelial ovarian cancer)”.Breaking up seated periods with time spent standing or engaged in gentle physical activity is advised to both prevent the health risks of a sedentary lifestyle, and also to improve workplace performance including productivity.

Standing desks magnify the productivity of an individual

Call centre workers are among the most closely monitored, measured and analysed when it comes to worker performance, productivity and quality, making them the perfect subjects for study of workplace behaviours. Researchers at the Texas A&M Health Science Centre School of Public Health followed 167 employees at a call centre to find out if sit-stand desks could boost their productivity.

Half of the workers studied were given adjustable standing desks to use over six months, with the other half sticking to their normal desks.

The sit-stand users were able to adjust their desks so they could sit or stand as and when they wished. Workers who used the standing desks sat for about 1.6 hours less per day than their standard static desk-using colleagues.

Productivity was measured by the number of successful (ie revenue-generating) calls made to clients by advisors per hour.

Employees typically made between 400 and 500 calls a month, with a target of two successful calls each hour. In the first month, the sit-stand group logged 23% more successful calls than their seated colleagues, rising to 53% by the sixth month. The study concluded that employees were using the sit-stand desks were 45% more productive that those with standard desks.

Mark Benden, Ph.D., C.P.E., associate professor at the Texas A&M School of Public Health said: “We hope this work will show companies that although there might be some costs involved in providing stand-capable workstations, increased employee productivity over time will more than offset these initial expenses

“One interesting result of the study is that the productivity differences between the standcapable and seated groups were not as large during the first month,” said Gregory Garrett, M.A., a public health doctoral student and a lead author of the study. “Starting with the second month, we began to see larger increases in productivity with the stand-capable groups as they became habituated to their standing desks.”

How standing desks can solve the problem of a sedentary lifestyle

In the UK, the SMART Work & Life study, based on seven years of development and testing by researchers from the University of Leicester and Loughborough University, found that standing desks contributed to: less sitting time; better job performance; improvements in lower back, neck and upper extremity musculoskeletal issues; reductions in sickness presenteeism; less fatigue; greater staff engagement; and increases in quality of life

Supporting provision of a standing desk with education and ‘nudges’ about how to use them increased usage rates.

Other studies are ongoing, including one in Edinburgh using Sit-Stand.Com® adjustable standing desks, with results due to be published in coming months.

At Sit-Stand.Com®, it is our experience that user education increases sit-stand desk usage by a multiple of four times. That’s why we offer Active Working Seminars® and FREE User Guidelines to our customers, to ensure that best practice and behaviour change become embedded, delivering maximum wellness and productivity.